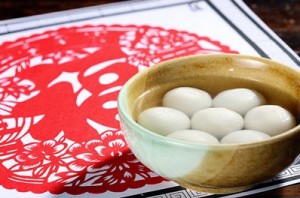 Tangyuan, a traditional food for Lantern Festival, is eaten together with family. Its name has a similar pronunciation as the word for “reunion” in Chinese. In Northern China, it is also called “Yue Xiao”, which derives from the festival. The food is made from glutinous rice flour with stuffing in round shape. The difference between Tangyuan and Yuanxiao is the way they are made. People in north China make yuanxiao by rolling a hard stuffing in glutinous rice flour. In south China, tangyuan is prepared by placing the filling inside rice flour wrapping, similar to the making of jiaozi. The round shape of the balls and the bowls where they are served, come to symbolise the family togetherness.
Lantern Festival was originated at Han Dynasty, with the Buddhism flourishing in China by then. The Emperor then ordered to light lanterns in palace and temples to show his respect to Buddha at 15th of the first lunar month. This practice was expanded to other parts of China along the years. As the time goes by, more and more activities are added on the Lantern Festival. In cities there are lanterns ceremonies in which all patterns of lanterns are exhibited, and in the countryside there are activities like setting off fireworks and walking on stilts. In some places there also develops some other activities such as playing the cloth lions, rowing boats on land, doing the yangge dance. Playing the swings and playing taiping drums.This is a festival for people having fun. On the night of the festival, people go on streets with a variety of lanterns under the full moon, watching lions or dragon dancing, playing Chinese riddles and games, and lighting up firecrackers. There is really a lot of fun for the young and the old. 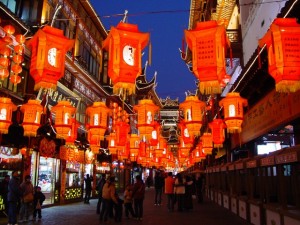 The game of guessing lantern riddles if also a must on the Lantern Festival. Lantern riddles are a peculiar game of the Chinese characters. The answer of a idle is hidden behind a beautiful poem or some common sayings which are written on the paper sticker on the festival lanterns, and the visitors of the lanterns should try to find out it. It is similar to the “crosswords”. The game of guessing lantern riddles first appears in the Song Dynasty. In the capital Lin’an (now Hangzhou) of the Southern Song Dynasty (1127-1279), there would be a lot of people sitting and guessing lantern riddles on every occasion of Lantern Festival. Since riddles can give people both knowledge and happiness, they are thus welcomed by all classes of the society spreading.

Chinese New Year, also known as Lunar New Year, or the Spring Festival, is one of the most eagerly anticipated occasions each year. This is the biggest and most significant event of the Chinese community.
The festival begins on the first day of the first month in the traditional Chinese lunar calendar and ends with Lantern Festival which is on the 15th day. Chinese New Year’s Eve, a day where Chinese families gather for their annual reunion dinner, is known as Chú Xī (除夕) or “Eve of the Passing Year.” This year Chinese New Year begins January 23 and continues until February 6. Originating during the Shang Dynasty (16th – 11th century BC), Spring Festival, which celebrates family reunion, is full of rich and colorful activities, and new hopes with the advent of spring and flowers blossoming. People from different regions and different ethnic groups celebrate it in their unique ways. 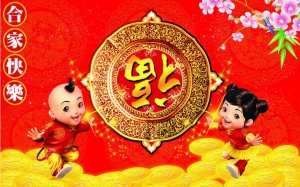 The Chinese New Year is a huge festival among Chinese communities across the world. Based on the lunar and solar calendars, the Chinese New Year falls on Sunday 10 February in 2013. The Chinese calendar is represented by one of the 12 animals of the Chinese zodiac. 2013 is the Year of the Snake.
Chinese New Year is celebrated worldwide to mark the first day of the New Year in the Chinese calendar, which differs from the Gregorian calendar. It is also known as the Spring Festival or the Lunar New Year and celebrations can last for about 15 days.
Markets or village fairs are set up as the New Year is approaching. These usually open-air markets feature New Year related products such as flowers, toys, clothing, and even fireworks. It is convenient for people to buy gifts for their new year visits as well as their home decoration. In some places, the practice of shopping for the perfect plum tree is not dissimilar to the Western tradition of buying a Christmas tree. 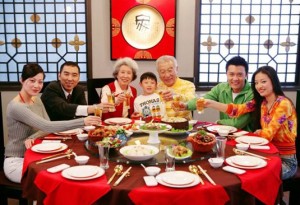 Bamboo stems filled with gunpowder that were burnt to create small explosions were once used in ancient China to drive away evil spirits. In modern times, this method has eventually evolved into the use of firecrackers during the festive season. Firecrackers are usually strung on a long fused string so it can be hung down. Each firecracker is rolled up in red papers, as red is auspicious, with gunpowder in its core. Once ignited, the firecracker lets out a loud popping noise and, as they are usually strung together by the hundreds, the firecrackers are known for their deafening explosions that are thought to scare away evil spirits. See also Myths above. The burning of firecrackers also signifies a joyful time of year and has become an integral aspect of Chinese New Year celebrations.
Dragon and lion dances are common during Chinese New Year. It is believed that the loud beats of the drum and the deafening sounds of the cymbals together with the face of the dragon or lion dancing aggressively can evict bad or evil spirits. Lion dances are also popular for opening of businesses in Hong Kong and many Chinese communities.
People exchange gifts and light firecrackers on this day. Other traditions associated with this day include hanging of the Fu symbol on the main door of the house which is supposed to bring good luck and wearing red color clothes. Dragon and Lion dances are also very popular during Chinese New Year.

Taking part in local event or festival is a fool-proof way to grab fun in your vacation. Polo Birth is one of the best choices in your Guangzhou destination in the first half year.

Statue of Nansha Aquatic Goddess in the Polo Birth parade. Photo from LifeofGuangzhou.com

Polo Birth (波罗诞) is one of the most influential temple fairs in South China, and has more than a thousand years of history. The fair is held in February 11 – 13 at God of South China Sea Temple (南海神庙) in Huangpu, Guangzhou. Once a year worshippers flock to pray to the God of the South China Sea. It is said that in the Tang Dynasty an envoy from Polo, a small nation near India, came to Guangzhou. The envoy was so fascinated by the prosperity of the city that he missed his ship back home. After his death, Polo Temple was built in his honour. It marked the starting point of the “Maritime Silk Road” to the Indian Ocean in ancient China.

Tips: if you like to take part in local event or festival, do contact your guide or search as many information as possible in advance. There will be lots of people at that time, and you are likely to get lost by circling around without even find an entrance.