As the ancient town of Guangzhou, Xiguan is located in Liwan district with its north to Xicun, south to Pearl River, east to Renmin Road and west to Xiaobei River. Now it has become a place for people to memorize the history of Guangzhou. Are you ready for Canton fair 2013? If you have no time to travel in China,  Welcome to Xiguan when you come to Guangdong for Guangzhou Fair. 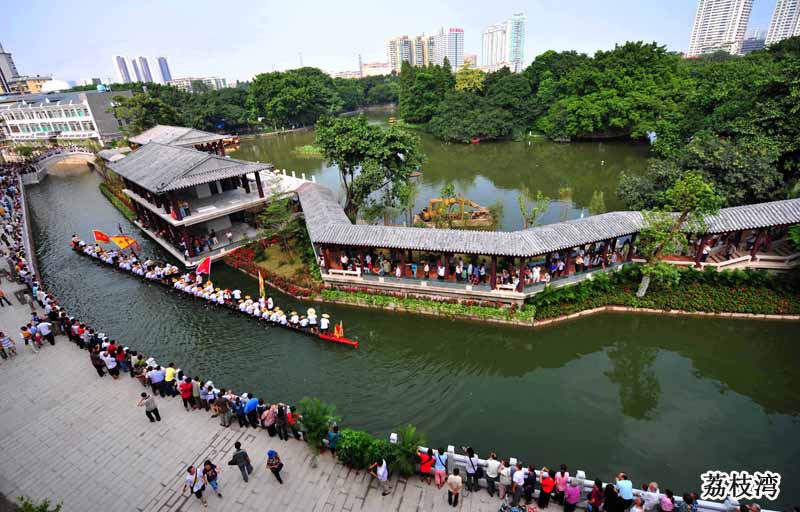 Xiguan is the ancient Guangzhou town and is located in the Liwan district. Today it is a historic and a very important location memorizing and highlighting the important history of the country. It is known mainly for the well preserved traditional architecture and ancient styles of houses.
Today’s Litchi Bay is exuding renewed vitality and elegance on the back of its rich cultural heritage and local people’s hard work. It’s a symbol of the millennia-old Xiguan culture, having borne witness to Xiguan culture and history and the evolution of ecology and civilization.
The history of litchi planting in the Litchi Bay dates back to 196 BC. During the Eastern Han Dynasty, litchi fruits produced here were tributes to the emperor and gifts for foreign diplomats, hence the name “Litchi Bay” or “Litchi Shoals” for this fertile land.

Xiguan preserves lots of traditional architectures of ancient styles. Xiguan Mansion is one of the representations. The facade of a Xiguan Mansion was generally built with grey bricks, and the main wooden door is accompanied by a Tanglong (horizontal wooden bars) and a pair of ‘café style’ outer doors at the entrance. The interior is very symmetrically structured; from the front to the back of the house there are as follows: the portal, the hallway, the main hall, the first room, the second hall and the back room. There is also a patio and garden inside. Hardwood furniture, carved wooden ornaments, stained glass Manchuia windows, and many other Cantonese features come together to create an old Guangzhou style house. In the past, only the well-to-do families of businessmen or officials could live in these grand and magnificent places.