The Baotu Spring is a culturally significant artesian karst spring located in the city of Jinan, Shandong Province, China. It is mentioned in the Spring and Autumn Annals, one of the Five Classics of Chinese literature and was declared the “Number One Spring under the Heaven”  by the Qing Dynasty Emperor Qian Long. Welcome to China for Canton fair. HRC is pleasure to provide booking Guangzhou hotels, China Tour Guide and Indochina tour packages for you. 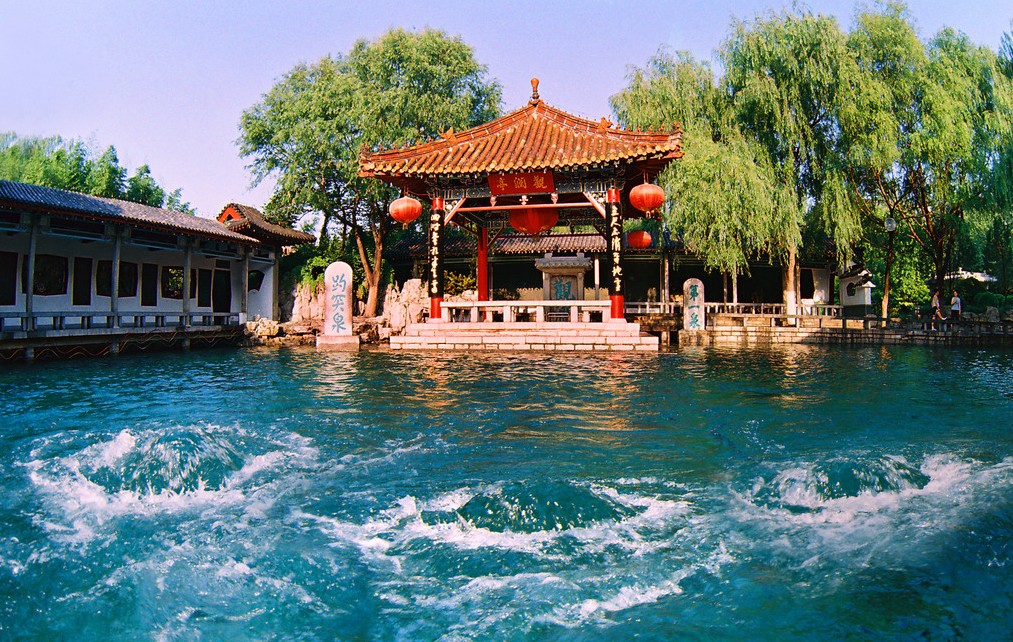 The city of Jinan, which is known as a city of spring for every family to share and for everyone to enjoy, has been bought to fame through its amazing springs. Amongst the seventy-two surrounding springs in this city, Baotu Spring is the crown. Located in the center Jinan, to the south lies Qian Fu Mountain, to the north lies Da Ming Lake, to the east lies Quan Cheng Square, this nice spring in the middle of the bustling city is not only a top distinctive cultural scenic spot but also has become the symbol of the city of Jinan.
Baotu Spring is located in the centre of Baotu Spring Park and is renowned as the best of the 72 springs in Jinan. Since ancient times, many famous poems and prose have been written relating to its unique beauty. According to experts’ research, this spring has a history of 3,543 years, dating back to the Shang Dynasty (16th –11th BC). The special geographical structure in Jinan creates the special Baotu Spring. The pool is rectangular in shape, stretching about 30 meters (about 98 feet) west to east and about 18 meters (about 59 feet) north to south. Water pours out from the underground limestone cave throughout the night and day, sometimes reaching its maximum of 240,000 cubic meters per day. When water bursts out from the three outlets, the spring creates thunderous sounds and sprays water jets. Sometimes water columns are created that reach as high as 26.49 meters (about 86.9 feet), making a real spectacle. 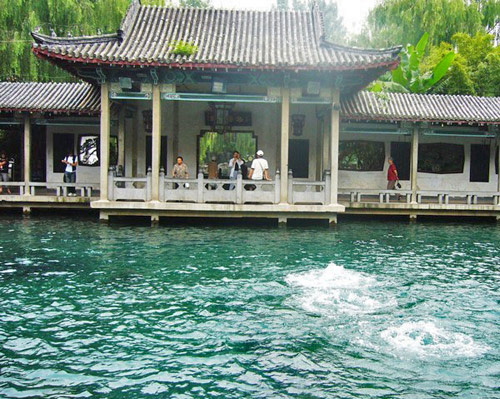 The average temperature of the spring water is about 18 degree Celsius throughout the year. Especially in cold winter, the warm spring water will create mist that floats above the spring just like clouds in the sky. With the ancient architecture surrounding the spring, you will feel as if standing in a dreamland but not in a real world. Moreover, research has been taken place and finds out that the spring water is pure in quality that ideal for drinking. You can try the taste of tea that makes by the spring water when you are here.
The spring water is very sweet, optimum for making tea, which is limpid in color, rich in aroma, and good in taste. Sitting under the “Watching Crane Pavilion” in the east side of the spring with a cup of tea in hand, one’s mind will fly faraway and hates to leave.
The Baotu Spring Park has memorials of Li Kuchan, a master in traditional Chinese Painting, Wang Xuetao and Li Qingzhao. The park also holds performances of Peking Opera all year round. With ten cultural features, including the spring, rocks, opera performances, lanterns, chrysanthemum, calligraphy, paintings and stone tablets, the Baotu Spring Park has become a world famous tour spot, which synthesizes characteristics of both the south and north parks in China and combines the spring, rocks and culture of landscape garden in one park.  It is currently one of the three major tourist attractions in Jinan which serves as an ideal location for tourists who are looking for a place of serenity in a bustling city.